A reflection from near the Moon

Krystal K. Lindahl August 11, 2020 Science & Education Comments Off on A reflection from near the Moon 117 Views 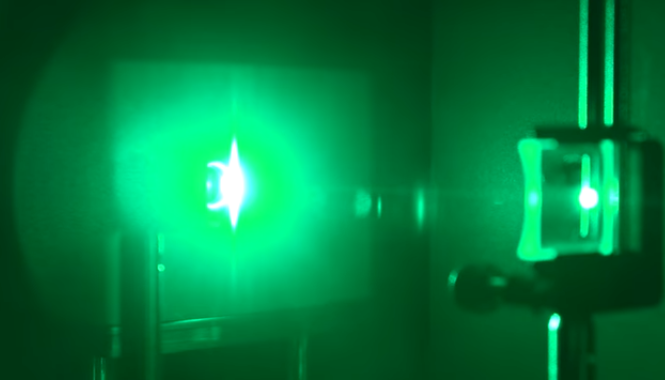 It’s not quite “ET phone home”, but NASA has finally got a signal from space that it’s been waiting for.

Dozens of times over the last decade its scientists have launched laser beams at a reflector the size of a book about 385,000 kilometres from Earth and got nothing back.

Now they and French colleagues have announced, in a paper in the journal Earth, Planets and Space, that a returning signal has been received, and this, they say, could help decide whether the last working science experiment from the Apollo era still has something to give.

The reflector is mounted on the Lunar Reconnaissance Orbiter (LRO), which has been studying the Moon from its orbit since 2009. It was placed there as a target to test the reflecting power of panels left on the lunar surface half a century ago.

The panels have one job, but they’ve done it well. Aim a beam of light at them and measure the amount of time it takes for the light to come back, and you know how far away they are.

Decades of doing this has led to major discoveries, NASA says. One of the biggest is that the Earth and Moon are drifting apart at about the rate that fingernails grow: 3.8 centimetres a year. This is the result of gravitational interactions between the two bodies.

“Now that we’ve been collecting data for 50 years, we can see trends that we wouldn’t have been able to see otherwise,” says planetary scientist Erwan Mazarico. “Laser-ranging science is a long game.”

The problem is that the reflectors are getting weaker – some are returning only a tenth of the expected signal – and this reduces their value.

One suggestion is that dust has settled on these reflectors – possibly after getting kicked up by micrometeorite impacts to the Moon’s surface – and that this is both blocking light from reaching the mirrors and insulating them, causing them to overheat and lose efficiency.

Scientists hope to use LRO’s reflector to determine if that’s true. They figure that if they find a discrepancy in the light returned from its reflector versus the surface ones, they could use computer models to test whether dust, or something else, is responsible.

Getting a signal back is thus a good start, and Mazarico and his team are refining their technique so they can collect more measurements.

The signal was picked up by the Goddard Geophysical and Astronomical Observatory in the US, which uses visible wavelengths of light, and the Université Côte d’Azur in France, which has developed a new technique using infrared light, which is invisible to the human eye.

They are each made of 100 mirrors that scientists call “corner cubes,” as they are corners of a glass cube; the benefit of these mirrors is that they can reflect light back to any direction it comes from.

Another panel with 300 corner cubes was dropped off by Apollo 15 astronauts in 1973. Soviet robotic rovers called Lunokhod 1 and 2, which landed in 1970 and 1973, carry two additional reflectors, with 14 mirrors each.

Previous 11 L.A. pro teams forge ‘The Alliance: Los Angeles’ to use sport for social justice
Next Why MLB didn’t use bubble plan for 2020 regular season; and what league insiders think of the decision

In physics, chilling out isn’t as simple as it seems. A hot object can cool more quickly than a warm one, a new study finds. When chilled, a warmer system cooled off in less time than it took a cooler system to reach the same low temperature. And in some cases, the speedup was even …